On Thanksgiving day, after the Turkey’s been gobbled and the mountains of leftovers packed away in the fridge, it slowly starts to kick in. No, we’re not talking about tryptophan from the Turkey, but rather that first little burst of Holiday shopping adrenaline: Black Friday is hours away. 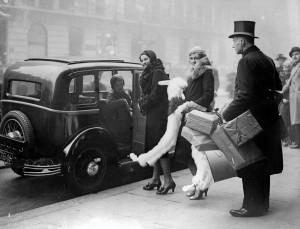 On Thanksgiving day, after the Turkey’s been gobbled and the mountains of leftovers packed away in the fridge, it slowly starts to kick in.  No, we’re not talking about tryptophan from the Turkey, but rather that first little burst of Holiday shopping adrenaline: Black Friday is hours away.

And as you prepare to brave the November chill in various layers of coats, jackets and blankets, we thought we might provide a little insight into the question every Black Friday shopper asks themselves as lines stretch down the block, and the cold starts to penetrate their 27 layers of wool, cotton and gabardine: “How did I get here?”

The history of Black Friday actually begins on a Thursday and with a parade.  The Macy’s Thanksgiving Day Parade, created in 1924, has long been ushering in the Holiday shopping season, and of course, that season begins on the Friday after Thanksgiving.

Jump to 1939, when Franklin D. Roosevelt–32nd President of the United States–moves Thanksgiving back a week to give retailers more time to peddle their wares.  Roosevelt’s plan caused quite a stir as he announced the change in October.  Many celebrated the Holiday in its original time spot that year and mocked Roosevelt’s Holiday as “Franksgiving”—it wouldn’t be until years later that the date stuck.  In retrospect, we can’t help but wonder if Roosevelt knew what he was doing all along, because a year in which two Thanksgivings are enjoyed sounds like the opposite of a mistake to us.

Fast forward to Philadelphia in the mid 1960’s, where local law enforcement dubs the Friday after Thanksgiving “Black Friday” as thousands of football fans pour into the city to watch the Army-Navy game on Saturday.  While causing dread and over-time for cops, local shop owners see their profits soar from the influx of sports fans.

It wasn’t until the mid-1980’s that the story of businesses getting out of the red and into the black financially, started to make the rounds.  Savvy marketing professionals rewrote the story of Black Friday, removing the negative connotations from Philadelphia and instead making it about stores offering bargains and seeing profits for the first time all year.

Today, Black Friday acts as the busiest shopping day of the year, and the only day in which some people are willing to get up before six.  The mythology of Black Friday continues to grow each year as the deals become extravagant and the crowds become more and more… well, crowded.

But if you’re not into that kind of thing, the long lines, the large crowds, the early mornings and the cold temperatures, then The Fruit Company is your destination for Black Friday deals.

Regardless of how you spend your time this Thanksgiving/Black Friday, we’d like to wish everyone a safe and family-filled Holiday season.