Not being a world traveler myself there are many fruits that are “out of the ordinary” for me, most of them from the world’s tropical regions. I know that even some of these fruits are considered ordinary for some. Here I submit my list of the top 6 most bizarre fruits and would be happy to hear your experiences with these or if you know of one even more bizarre! 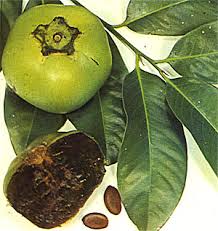 How strange is this one? The fruit’s dark brown flesh might remind you of food gone bad, but it’s perfectly fresh and if you like chocolate you’ll love the Black Sapote! It is often referred to as the “Chocolate Pudding Fruit” because it tastes almost exactly like chocolate. A member of the persimmon family, this fruit has the consistency of chocolate pudding with rich luscious deep brown flesh and is a chocolate lover’s dream come true. Not only is it low in fat, it can fool the most ardent chocolate connoisseurs when it is used as a chocolate substitute in cakes and milkshakes. Whip with yogurt or thickened cream to make an instant chocolate mousse.

This odd-looking fruit is actually one of the oldest members of the citrus family, and is an addition to this list both for its appearance and the fact that it’s used mainly for its peel rather than the flesh.The Buddha’s Hand is a fragrant citrus fruit that is segmented into finger-like sections. It has a thick peel and a small amount of acidic flesh that is seedless and juiceless. It is used predominantly by the Chinese and Japanese for perfuming rooms and personal items, such as clothing. The peel of the fruit can be candied, but in Western cooking the Buddha’s Hand is often used for its zest. 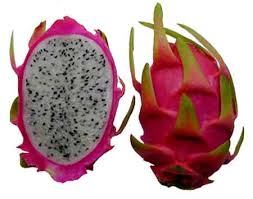 Honestly, I didn’t know this was a real fruit! I had just assumed it was an invented name for a beverage I enjoy. Dragon Fruit, despite their funky, prickly appearance, have a creamy pulp and a delicate aroma. The flesh, which is eaten raw, is mildly sweet and low in calories (always a plus!). Eating the dragon fruit is similar to that of kiwi due to a prevalence of sesame seed-sized black crunchy seeds in the flesh of both fruits. The skin is not eaten. The dragon fruit is best eaten by cutting the fruit in half and scooping the flesh out. The flavor is very refreshing and sweet. Dragon fruits are delicious chilled and can be served in fruit juices and fruit salads or made into jam. They can also be juiced and added to alcohol to make a very delicious drink. 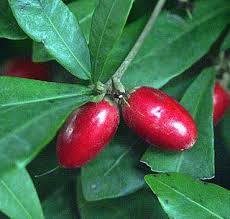 Although not sweet itself, when a single Miracle Fruit is eaten an extraordinary effect occurs: one can eat a slice of lemon or lime without wincing. The marvelous aroma and inherent sweetness of the citrus remains but the sourness is almost completely covered. Diabetics and dieters in Asia often consume the Miracle Fruit via a tablet that quickly dissolves on the tongue to eliminate the need for sweetening a dish with sugar. The effect remains for some 30 minutes or more, I think that qualifies as rather bizarre.

The Snake Fruit’s dark brown, reptilian-like skin (tough but surprisingly thin and easy to peel), encloses a delicious crunchy fruit. The flesh is divided into 3 or more lobes that remind me of garlic cloves. While Salaks are not juicy and have been compared to a carrot in firmness, its flavor is like a cross between a sweet apple and a pineapple. Though the name of this fruit and the fact that it might remind you of a snake shedding its skin might creep some of you out, I definitely think it’s worth a try. 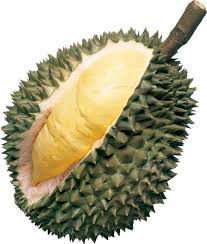 This is my choice for being the most bizarre fruit. It’s large, thorny, and smelly. The strange Durian has attracted cult-like followings of both lovers and haters. In Southeast Asia it’s considered “the King of Fruits”, is roughly the size of a cantaloupe and has a mild onion or almond taste. That is not the only way it has been described though.
Food and travel writer Richard Sterling says of the Durian: “… its odor is best described as pig s***, turpentine and onions, garnished with a gym sock.” Another food and travel celebrity, Anthony Bourdain, actually loves the Durian but says “your breath will smell as if you’d been French-kissing your dead grandmother.”
The Durian is so controversial (and stinky) that some public areas like hotels and airports in Southeast Asia have banned the fruit.