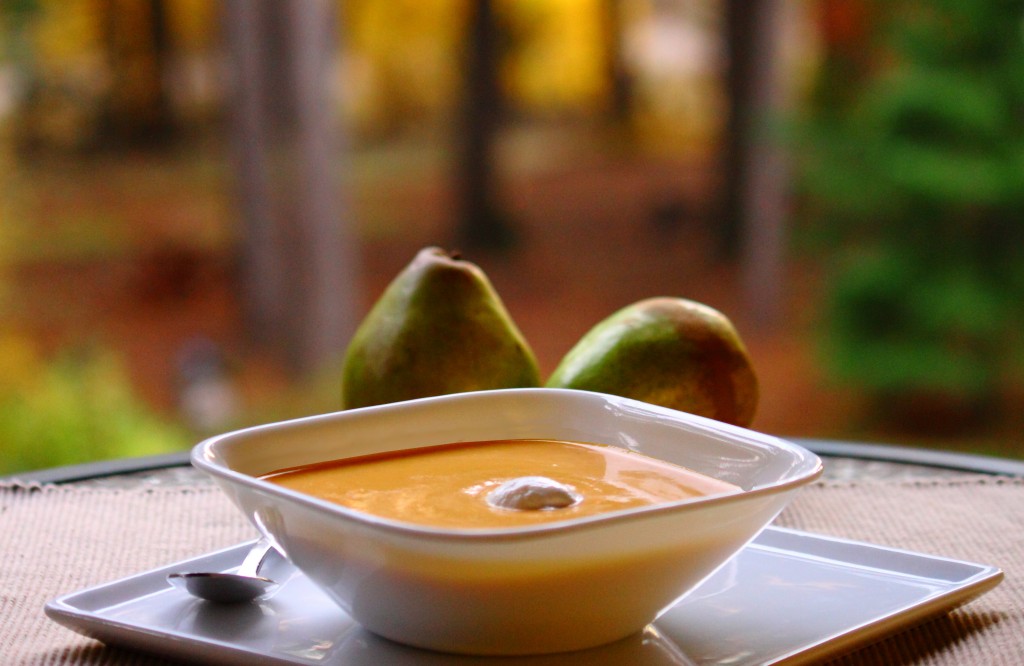 There isn’t a menu written out but everyone knows about the soup.  Their eyebrows shot skyward as you said sweet potato, pear, and jalapeño in the same sentence; a few noses furled.  But you aren’t concerned.  Whereas some see a mixture of disparate ingredients, you see harvest in a bowl.

As friends and family make their way in and out of the kitchen, they will ask about the soup.  They will express their inability to combine the three flavors in their head, and you’ll be forced to dole out a bit of reassurance.  It tastes great, you’ll say.  You’ll even give out a small spoonful to the most talkative of your guests so that word gets out.  By the time the soup hits the table, everyone will go quiet in reverence.  The soup is here.  The soup they’ve heard so much about.

And then the soup will do the talking.

Heat the olive oil in a saucepan.  Saute the onions with cumin and curry allowing the onions to sweet and become translucent.  Add the sweet potato, stock, and simmer for 30 minutes or until the sweet potatoes are tender.  In a seperate pan, heat the butter over medium heat.

Add the pears and jalapenos and saute.  Add brown sugar and half and half, scraping the bottom of the skillet.  Combine the two pans and puree in batches in a food processor until you’re happy with the consistency.  Serve with a dollop of sour cream and sweet potato chips. Yield: 8 servings.

You’ll want a pear that can stand up to the Jalapeno.  We suggest one of our Green Anjous or Webster Comice pears because of their texture and their courage in the face of jalapeno shaped jalapenos.