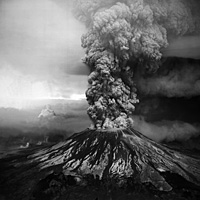 We knew that as kids.  Others called them volcanoes but really, they were always giants.  We learned their parts: the magma, the rock, the pressure and release.  We learned, to our disappointment, that most were dormant, or worse, inactive.  And then we learned about the 1980 Mt. St. Helens eruption.  It was the kind of thing we’d been waiting for, something even we couldn’t have made up.

It started with an earthquake on March 18th—a tiny glimmer of life after 123 years of hibernation.  More would follow.   Avalanches crashed down the mountain side as earthquakes grew in size and frequency.  Inside the volcano, magma was swelling.

There were tiny eruptions. Plumes of ash spilled from the volcanoes tip and generated static electricity; lighting threaded the darkened sky. On April 3rd, Governor Dixy Lee Ray declared a state of emergency and called for an evacuation.  Some refused to leave.
On the morning of May 18th, a 5.2 magnitude earthquake struck the mountain causing the north face to separate, exposing the magma inside to a lower pressure.  The result was an explosion that would devastate the area, and trigger a series of events too numerable to list, too destructive to fully comprehend.

This is why when we talk about volcanoes, we still talk about giants 30 years after the eruption of Mt. St. Helens. Look at the photos, at the plume of smoke and layers of ash that coated the surrounding cities.  Look at the destruction and the re-growth: it still seems impossible.

So we find ways to talk about the eruption, ways to make it seem real.  We remember the mountain stirring beneath a 123-year-old winter coat, and the lighting punctuating the ashy sky like veins.  We remember the explosion, the destruction, and the ash that circled the world in the span of two weeks; but mostly we remember how quiet everything got after it happened and how we couldn’t think of a single thing to say.  The closest we came was ‘giants’.